Last weekend I took part in the global game jam chapter organized in my home town. For those who don’t know the concepts of a game jam, it is a type of events where team gathers to make a game in 48h. The global in the name means that it simultaneously takes place all over the world, both remotely and with physical gatherings. 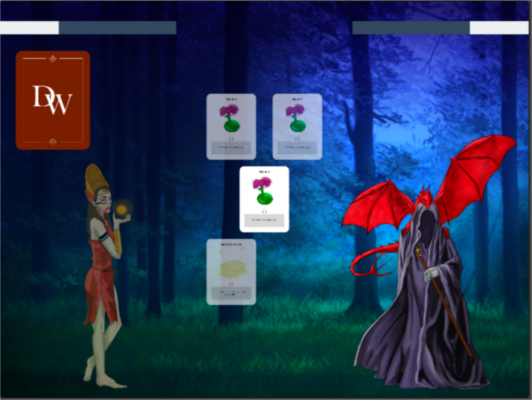 Screenshot of our game, “Duel of Wizards”

I took part in the jam with 5 friends I knew from before. Our main goal was to be able to ship “something”, given that none of us made a game before. We decided to develop a card game based on the “draft” mechanism: each player picks a card from a set, then gives the set to the opponent who picks a card and passes it back until the set is empty. If you want to try it, you can play it in your browser.

The team was quickly divided into three parts:

The experience was a blast, and everybody in the team loved it as well! Sadly our game concept wasn’t as catchy as we hoped and the games were too long to stay interesting. This is largely due to our lack of experience making games, and I am sure we will become better with time.

Related to the point above, I think we should have done more iterative design. The coolest part of the jam was when we were integrating the assets, redoing the layout or improving the game and it felt like every 30 min someone had something cool to show to the others. Doing iterations sooner may have also allowed us to iterate on the gameplay.

Lessons learnt for the next jam:

UPDATE: @EricDupertuis posted his own writeup of the jam.